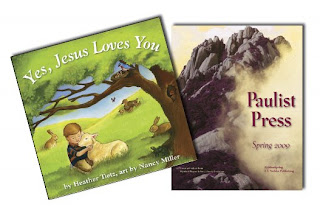 I'm so excited that after many years of trying I have illustrated a picture book. Yes, Jesus Loves You by Heather Tietz. I had to read the catalog entry on by Paulist Press several times to believe it's true. It's on pg. 15 of the PDF for the Spring 09 Catolog. YEAH, Here's the catalog description:

Written by Heather Tietz, Illustrated by Nancy Miller
Yes, Jesus Loves You Ages 5-9
Yes, Jesus Loves You is a soothing stroll through God’s creation, in lullaby form. His love for us can be seen throughout all he’s made. The very shape and function of our physical bodies were designed by Him. Animals, great and small, the elements, tame and unreserved, plants, frail and strong, are often quiet lessons about God’s character and His love for humankind. Even the night itself is from God-the stars, a night light, the call of insects, a song, the darkness a reminder to pray. This charming story may be sung or simply read and lends itself easily to accompanying hand movements. It is perfect for church, for school, or for putting little ones to bed with a sense of peace and joy.

Available for preorder on Amazon.com.

ABOUT PAULIST PRESS
...Paulist Press began to expand rapidly in the 1950s. By 1966 it was the largest Catholic distributor and publisher in the world, employing 235 lay employees and the services of six Paulist priests, and distributing nearly 20 million books, pamphlets, and magazines each year. To channel books into Catholic parishes around the country, the Press established the National Catholic Reading Distributors (NCRD) in 1958. In 1962 Paulist Press enlarged greatly when it acquired Newman Press, with two book stores in Baltimore and Washington, D.C...Through children's books, works on spirituality and prayer, and studies of the latest developments in theology and scripture, the Press continues its mission to bring the riches of the Catholic heritage to Catholics and persons of other religious traditions.

NEVER GIVE UP
I'm so glad I never gave up. I can only tell you when I first got out of college I was pretty idealistic and thought if you are talented enough they will find you. I also didn't realize how common place rejection was in the picture book industry. I'd hung up my illustrator's cap for 4 years before I tried to revisit send out work to publishers. I was green and naive.

It was later on when I was working as a graphic designer at a magazine that I met a co-worker that had similar interest in picture books. It sparked something in me and made say I'm really going to try this time and not give up. I joined the SCBWI in 2002 and then I attended a regional conference. That was an eye opener. Just in the region I'm in there was a large attendance. Attendance of some of the most talented published authors and illustrators in the country. Yikes! You know I met some really nice illustrators and writers. This is just a bias but I think children's book writers and illustrators are some of the nicest people you will ever met. They are passionate and they will share what they know without a bat of an eye.

It was after I attended the conference I had a completely different perception on some of the old rejections I'd received. Back then I'd submitted a joint submission with a writer friend. We actually got a letter from a major publisher saying they were taking it to an editorial meeting to consider it for publication. A month later we go a rejection notice with comments. Prior to the conference I thought if you don't get accepted what's the point of it. The conference folks that I sat with said you have to realize the number of submissions major publisher receive and the fact that they wrote back is a positive sign. Also the fact the editorial assistant provided comments from the meeting is an additional plus. I'm glad I decided to listen to those nice folks. Sad, to say I don't remember all their names. But two illustrators I met at the conference Liz Conard and Elizabeth Dulemba were always so great to stay in touch and email words of encouragement.

Also a thanks to Belgin whom I met via email serendipitously through another illustrator.

Now when I look at that particular rejection letter I see the positive side of it. If you read between the lines sometimes rejection letters are telling that you should keep going.

Btw, sorry for any typos this is an uber long post.
c 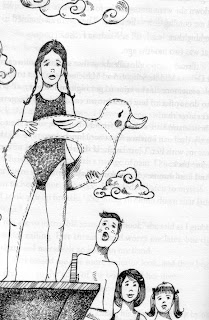